Can we keep our stuff that was in moldy house

So, I am reading this woman’s blog and she is talking about this machine she used that helped her and her family with mold in their home.  If you are not familiar with our story go here. I didn’t see much mention of which product it was and then kept reading up on the technology.   I called the company and spoke to the owner of the company.  I was so embarrassed about having mold in our home, I lied and said it was for a friend.  It was not totally dishonest because a friend was having seizures and was very sick and after what we learned we were starting to think that maybe that was the problem, there too.  But, anyways, I was super embarrassed, I don’t know why but here we were living on our patio and I could not be in our home.  I explained to him that there were high levels of aspergillus in our home.  He explained, more of the technology and told me that I should expect the conditions to improve in my home within about 3 weeks but I will notice a big difference in less than a week.  There were 3 different machines for us to choose from.  One was called a 101, and the owner explained that it was like the little engine that could.  He said the 101 would be fine for our home, but it would take longer to clear because it doesn’t move as much air.  (the 101 purifies up to 1600 sq feet)  Then the 120 which is more powerful than the 101 and treats up to 2000 sq feet(we didn’t even think about this one) then the 110 which treats up to 5000 square feet and is the monster.  This is the machine that works the fastest.  Well, the 101 was $1,995.00 then the 110 was $5,795.00.  It was a lot of money but at the same time when it comes to moving and losing all of your belongings it will cost a hell of a lot more than the 6 grand.  The owner told me there was a 30 day guarantee, so I called my husband and he said, “what is there to think about, let’s do it”.  So we ordered our 110 and it arrived on January 16, 2015 (I will always remember this date, it’s like our wedding anniversary, lol)

On January 16th at approximately 3:30pm the 110 arrived. As you can see I wasted no time in setting it up.  My daughter helped me 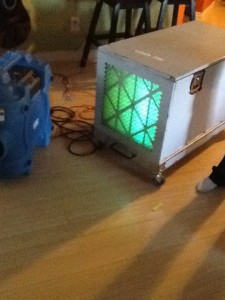 drag it in.   I didn’t realize when we were dragging it in that the wheels were not on, so I wound up gouging my floor.  But, at this point I didn’t care I just wanted to get this machine plugged in so we could see if it would work or not.  After all, we only had a 30 day guarantee and we needed to figure out where we were going to live if we wound up having to move. In the picture on the left, you see the blue machine that is a $1,000 air scrubber

we bought that did nothing to help us at all.  So, this 110 machine was our last effort at saving the home we worked so hard to make our own.  It was a truly heart breaking experience.  But, at the same time we realized again that nothing really matters as much as  we do to each other.   It has been a very humbling couple of years between getting overdosed and now mold.

As soon as machine I arrived I plugged it in and had a pretty glow inside from the lights.  (oh, and we attached the wheels, lol) So, now we just needed to put in the center part our home and let it run, with our central system’s fans running.  Then, we ran with the heat on and also with the a/c on. The machine gives a burning smell like when the heat is first turned on in winter.  This is good news because it means it is taking care of the mold.   We wanted it to circulate 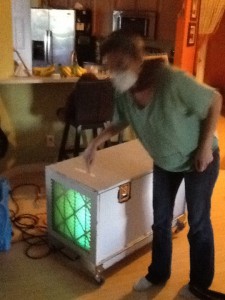 through the a/c system as well.

After about 3 days my husband noticed when I would go in to do something I wouldn’t be saying “OH, my goodness, I have to get out of here” this was a statement he heard a lot.  Then my daughter noticed after about a week that I wasn’t scratching myself everywhere.  I was able to spend more and more time in our house. I think it was by day 7 I could be in our home with no mask on but still needed to spend small amounts of time in our home.  I think I had a few days in our house all day.  I was feeling hopeful then around day 13 I felt really bad again in my house.  Still not sure what it was because on day 17 we were able to move in from our patio.  I was so nervous, I didn’t want to wake up shaking, or with a swollen tongue, and rash all over again.  It is kind of crazy but I definitely think I was having PTSD about mold, too.  But, everything went fine..  I slept like a baby all night.  My daughter was no longer stuffy in house and my husband said the air in our home seemed lighter.  It is hard to explain but after he said that I thought about it and when you would breathe in our home the air seemed heavy.  Strange, huh?

Well, we still had a lot of work to do in our house.  We lost half of our belongings and I was leary about buying anything new for the fear that this machine was only going to work temporarily or I was somehow convinced it worked but it really wasn’t lol.  I was so happy to have my daughter back inside our home.  She was a trooper about the whole thing but I know she was so happy to have some normalcy, return.

I forgot to mention but prior to us moving back in I moved machine into every room in house and let the machine run for 24-48 hours in the rooms we were going to sleep in. 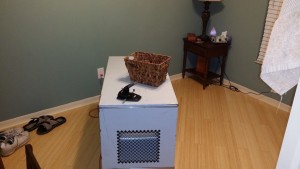 The room we were in was totally emptied of everything.  We lost everything in our guest room.  We just put the air mattress in there and that was our bed for many more months.

Here is a pic of our new living conditions.  Interesting, but much better than being on the patio and in the cold and wet weather. 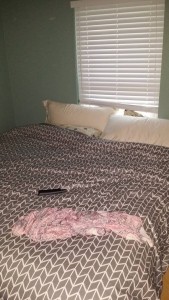 The air mattresses are so high it’s nice because we didn’t feel the dampness of concrete on patio.  We went through two air mattresses.

Our guest room is only about 9X10.  It is still a blessing to be back in our home vs. sleeping outside.  But, we had so much work ahead of us.  I didn’t have many clothes only what I bought new after finding out about mold.  I threw away my stuff it was making me itch and I could feel it neurologically when I wore the clothes.  I needed new clothes anyways, after I received  Benadryl 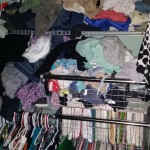 overdose I lost 65lbs, so a lot of my clothes didn’t fit me, thankfully.  My husband and daughter’s clothes were saved, thank goodness.

In my next blog post I will tell you how we did it.

Mold inside home. What it did to us 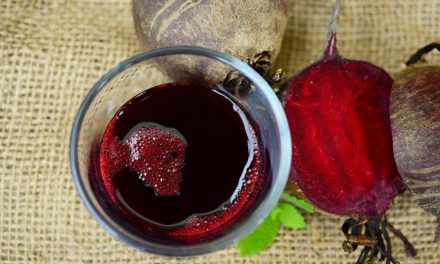 Beet Juice for the liver

Could our house be making us sick?